In May, over 60 news publications in Italy and around the world reported on our activities, through articles, mentions and interviews with our representatives.

The approval of a law in the Republic of San Marino, which allows unaccompanied minors from the Greek islands (and beyond) to be accommodated in foster care has caused an uproar. This is an important milestone for our organisation, because we have collaborated with the Organising Committee from the very beginning on the implementation of the draft law. The news was welcomed and spread with enthusiasm by many national and international newspapers: from Ansa Med to Infomigrants, and appearing in Internazionale's Frontiere newsletter, on San Marino TV and in Open Online. At Vatican News our Advocacy Director, Giulia Cicoli, spoke about the law with journalist Paola Simonetti, along with Paolo Berardi, spokesperson of the Organising Committee responsible for the law, and Councillor Sara Conti.

In Greece, the news triggered a debate, initiated by The Press Project and taken up by several newspapers: among these was News 24/7, which drew attention to San Marino's gesture, underlining the importance of the message sent to EU member countries. 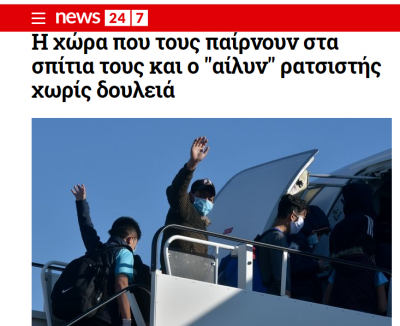 Also in May, in collaboration with Refugee Rights Europe, we published a report on the conditions of unaccompanied minors in the Samos hotspot. The document highlights the increase in risks and discrimination that children and adolescents have faced since the beginning of the pandemic. The news was picked up by Infomigrants, while Giulia Cicoli addressed the issue in an interview with Monica Stefinlongo and Paolo Farina on Radio Lombardia. The weekly publication Left also gave space to the report's findings, publishing an interesting analysis with statements from Giulia Cicoli and Nicolò Govoni.

At the end of the month, the media continued to follow the legal proceedings currently underway against our President, Nicolò Govoni: Agenzia AGI and Pressenza have continued to share the news of the trial's indefinite postponement, initially set for May 27, with Cremona Oggi and Big News Network publishing the information as well.

Meanwhile, the German TV channel ZDF has turned a spotlight on the North West of Syria, dedicating a report to the situation of children through the testimonies of Hasan, Marah and our program coordinator Abdulkafi Alhamdo.

Finally, we would like to mention the cultural and artistic events we've taken part in. On May 20th Nicolò Govoni took part in “Waiting for the festival”, an online preview of the Children's Literature Award Festival, during which he talked about his latest book, “Through our eyes”. Michele Senici, Education Director, talked about Still I Rise's educational method and experience with unaccompanied minors at an online event organised by the Goethe-Institut of Athens and promoted by Erasmus +. We ended the month with the in-person reopening of the photographic exhibition "Through Our Eyes", hosted by the Concilio Europeo dell'Arte in the Giardini della Biennale in Venice, at the InParadiso Art Cafè, thanks to the work carried out by the local chapter of Still I Rise in Venice.