In July, the launch of the new mission in the Democratic Republic of Congo aroused considerable interest in the Italian and international press. Nicolò Govoni and Giovanni Volpe — President and Nairobi Program Manager of Still I Rise, respectively — went on a reconnaissance trip to the Katanga region, and their direct accounts were an invaluable source of inspiration for bringing the issue of child labor in the mines into the media spotlight.

In the Kolwezi area, our new education center will come to life with the aim of removing children from child labor and trying to fill the huge educational shortcoming they experience. Giovanni Volpe spoke about this both on “Che giorno è,” the Rai Radio1 program hosted by Ludovico Suppa and Francesca Romana Ceci, and during the radio interview, “Una scuola d’emergenza per i minatori bambini del Congo” ("An emergency school for child miners in Congo”) with Jolanda Pupillo for SBS Australia.

On BBC Newshour, Nicolò Govoni tackled the issue of child labor and the implications for the western mining system; the interview was conducted by Julian Marshall, a historic BBC voice.

Radio Vaticana also dedicated an in-depth report to the news, devoting the entire space of the program “Il buon vento” (The Good Wind), concieved and presented by Paola Simonetti, to a conversation with Nicolò. Among the topics covered were the dramatic situation of children in the DRC, as well as the history and activities of the Still I Rise schools. 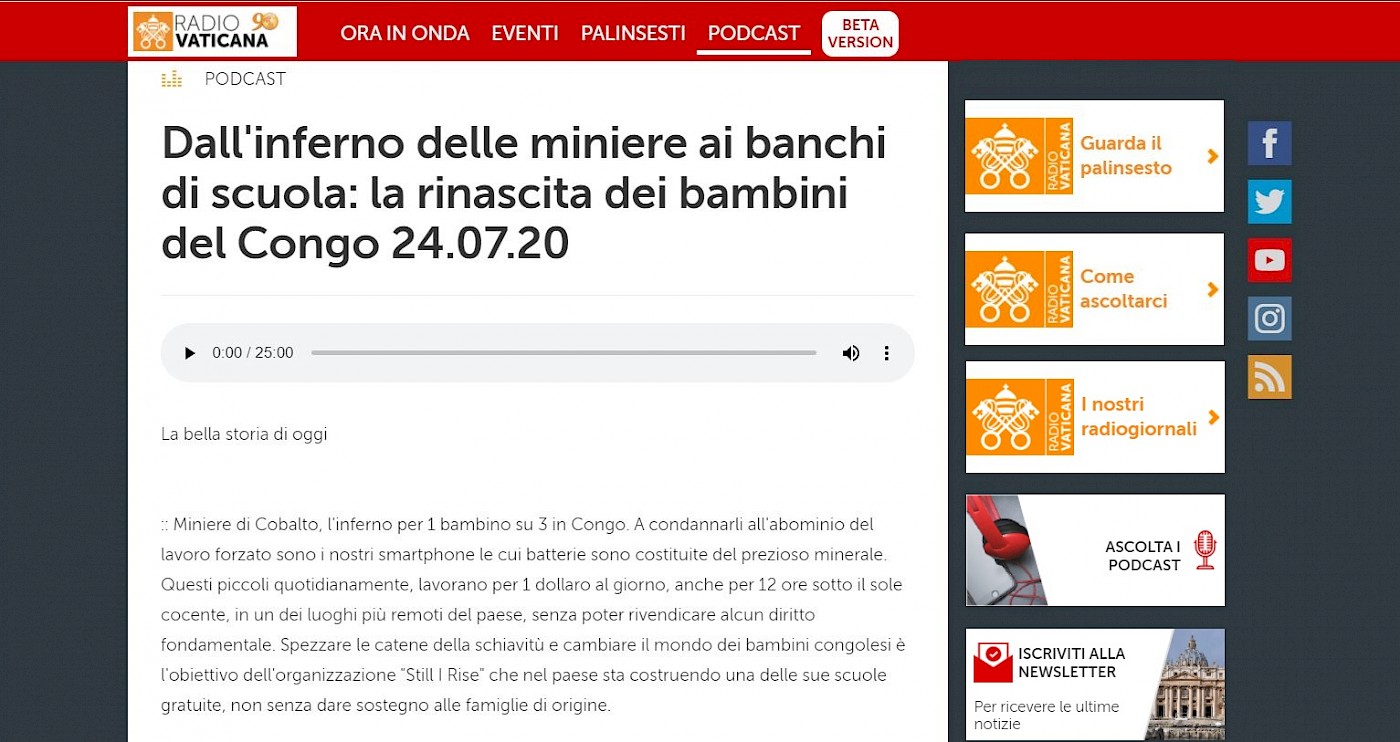 Our new project has also attracted the attention of major Italian press agencies: after AGI and Agenzia Dire, whose launches we had reported in the June press review, Ansa Mondo also spread the news, through an in-depth report by Rodolfo Calò on the issue of child labor in the Democratic Republic of Congo. 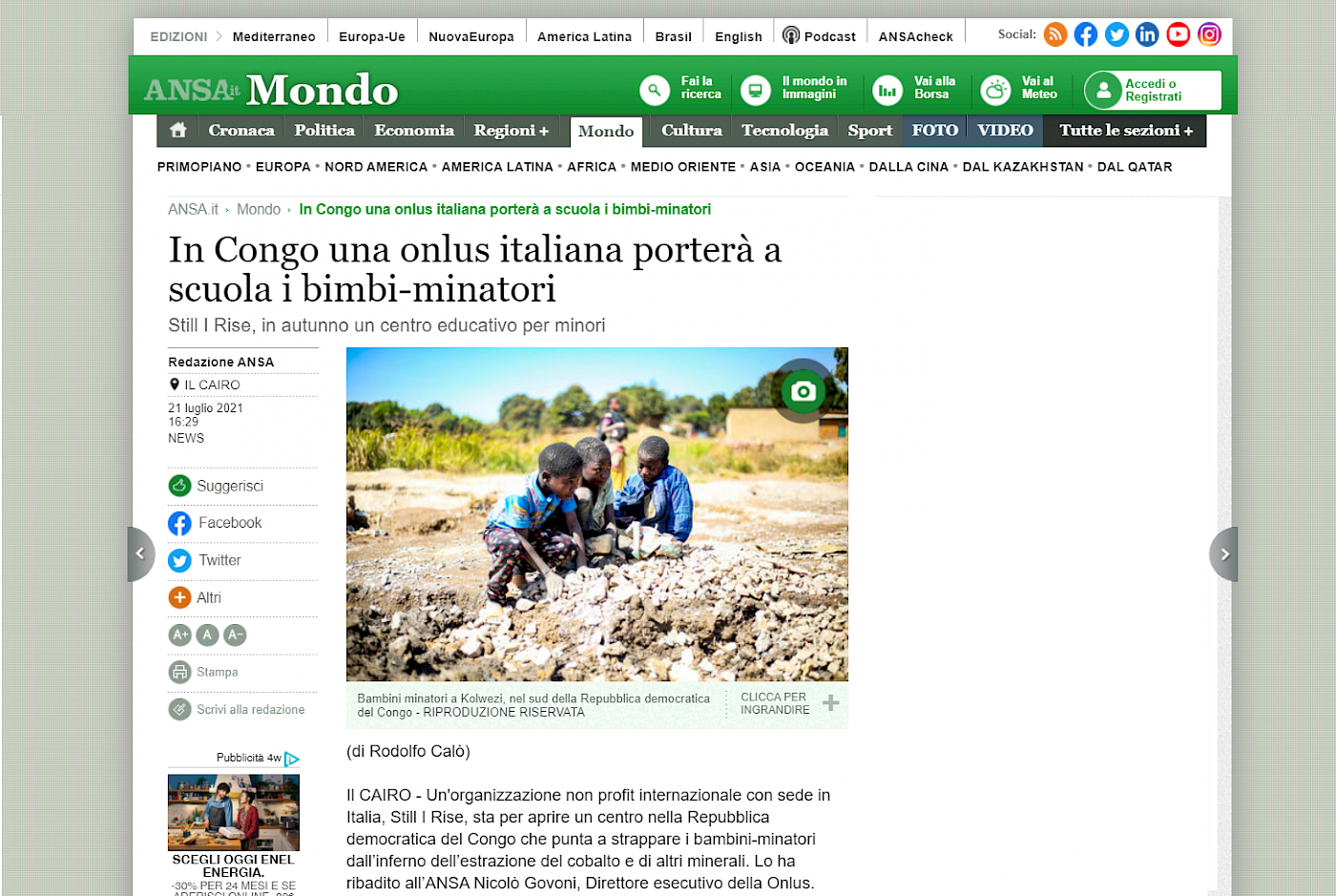 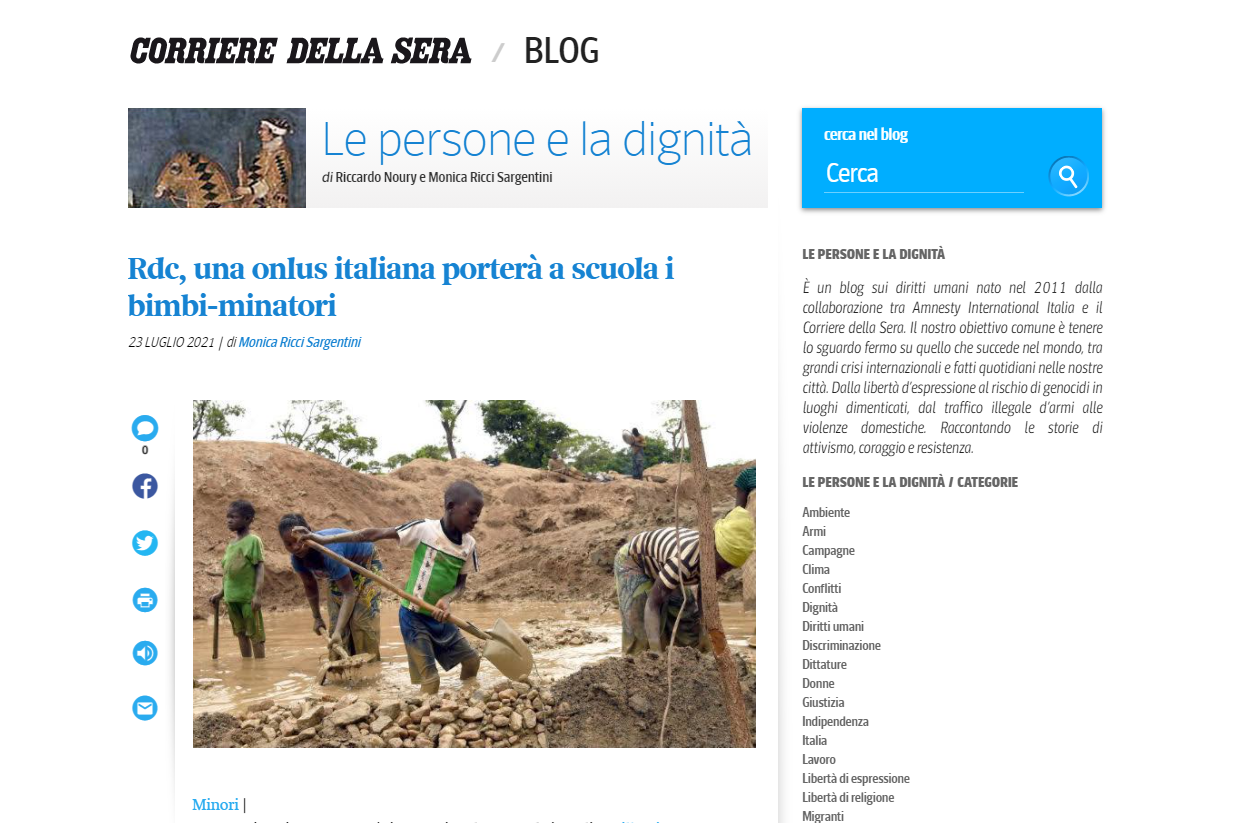 Meanwhile, our Advocacy Director, Giulia Cicoli, and our Syria Program Manager, Abdulkafi Alhamdo, launched an appeal from northwest Syria on the occasion of the expiry of the UN Security Council resolution for the entry of cross-border humanitarian aid through the Bab Al-Hawa crossing. Their live video was published by the Swiss Catholic Portal. Pressenza gave space to the press release issued on the occasion. 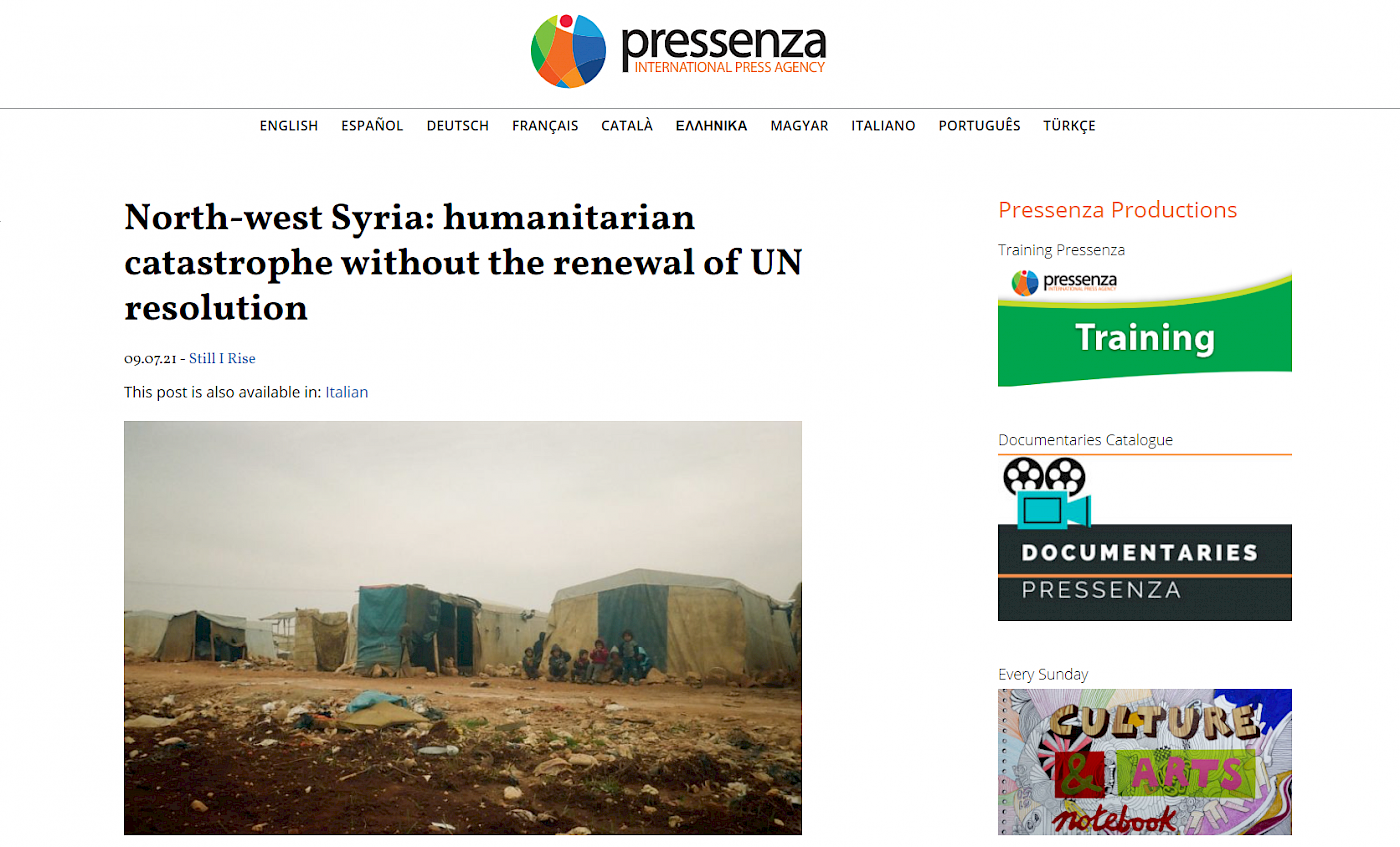 Speaking of Syria, in July we were also happy to share the launch of a new chapter of “Through Our Eyes,” the exhibition that moved Italy and the world with pictures taken by our students in Mazì, Samos. The success of this experience encouraged us to embark on a new journey, this time in the educational center of Ma'an, in the city of Ad Dana. Here, following a workshop led by the Syrian photographer Mahmoud Faisal, the students undertook the same exercise as their peers in Greece: they tried to tell the story of the world in which they live, through the lens of cameras specifically supplied for this purpose. The project was coordinated by Nicoletta Novara, creator of the exhibition, and the news was reported by Pressenza. The Huffington Post Italia dedicated an in-depth article to the project, including some of the most meaningful shots. 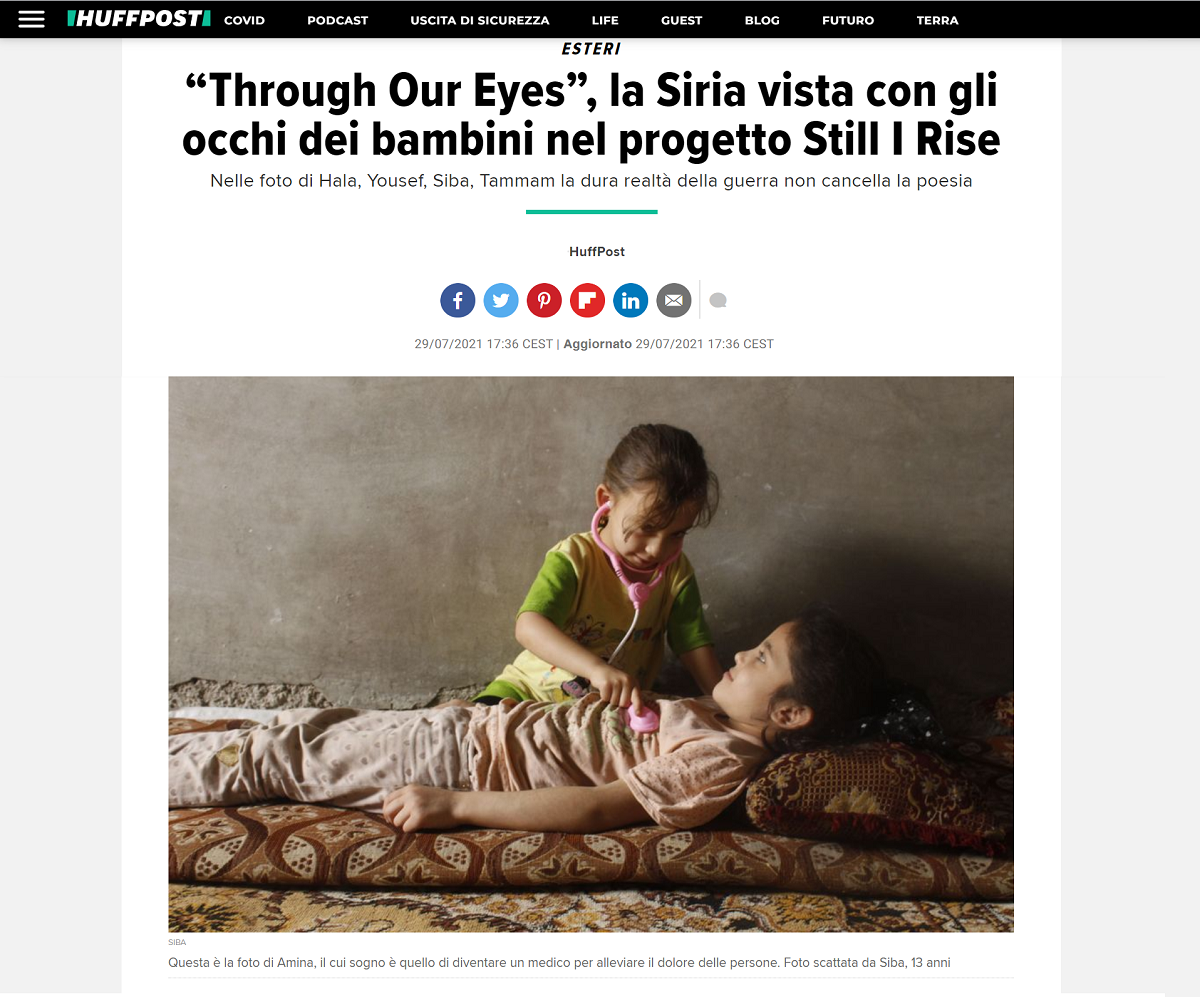