The line of life: in northwestern Syria life is hanging by a thread

On July 10th, a 1-year UN security council resolution allowing cross-border humanitarian aid into North West Syria will expire and, if not renewed, the consequences will be catastrophic for the 3.4 million people barely surviving on this aid.

North West Syria is a very small area, where more than 2.7 million Syrians from other parts of the country have moved to, mostly because they would risk their lives if they went back to regime controlled areas. More than 1.7 million live in camps with very limited access to running water or electricity, of which 80% are women and children.

In the past year, the Syrian pound has devalued more than 40%, which led to the prices of food staples rising over 200%: most people are struggling to find food to feed themselves and their families, and severe acute malnutrition in children increased 55% in April 2021 only.

People living here are in dire need of humanitarian and medical aid, as trade with other countries is close to impossible to achieve. Until July 2020, humanitarian aid was delivered through 2 border points from Turkey, one serving the Idleb are and another one serving Northern Aleppo. 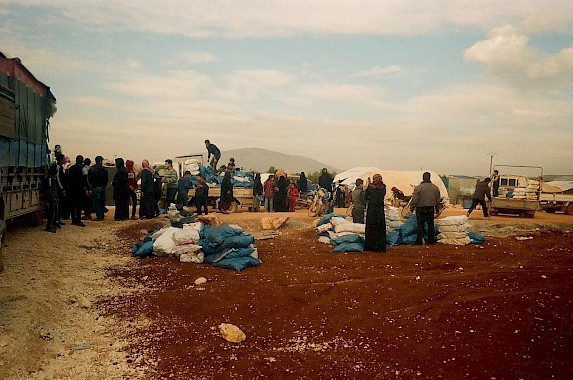 The resolution needs to be voted again

The decision of allowing cross-border humanitarian aid is made at the UN security council, and the aid is arranged and delivered by the UN. Last July, Russia and China vetoed a resolution to allow the 2 border points from Turkey to stay open, so for the past year all humanitarian aid has been going through only one cross-border point, called Bab Al-Hawa.

So much more aid and support is needed and yet, the Bab Al-Hawa crossing has been the only lifeline into North West Syria for the past year. We are talking about 1,000 trucks a month with food, medical and educational supplies and much needed life-saving aid and now - with the covid 19 crises - the few vaccines North West Syria was able to secure through the UN.

On July 10th, this resolution will expire and needs to be voted on again. Russia, who supports Bashar Al-Assad, has already made it clear that they wish for this border point to be closed, and for humanitarian aid to North West Syria to come directly from Damascus and the regime-held areas.

This would cause a humanitarian catastrophe.

Just to give you some context, in June alone the regime, backed by Russia, killed at least 46 people in North West Syria, according to the White Helmets. This includes an attack on a cemetery during a funeral and a house being bombed while the family was having breakfast.

As Amnesty International puts it “The notion that the Syrian government can replace UN aid is absurd. Not only would it be impossible for the government to match the scale of support provided cross-border, the authorities are notorious for systematically blocking humanitarian access”.

Our Program Manager on the ground in North West Syria, Abdulkafi Alhamdo, shares with us what the situation is like there and the impact that the UN Security Council resolution will have on the area.

“I want you to understand that keeping the border crossing open literally means keeping people barely alive. Millions of people in North West Syria have nothing: no home, no health system, no dignity.

They have been through so much trauma and so many physical injuries and pain from bombing, displacement, living in tents in scorching summers and freezing winters. The health system is non-existent and if medicines don’t come through the border crossing we will lose countless lives. The dramatic economical situation is also forcing families to send their boys to work and to marry off their young girls - they don’t want to, but it’s the only option they have to keep them alive. It’s either this or turning to crime: stealing to survive. Honestly, they have nothing other than the food and medicine coming though the border to keep them alive.

Moreover, humanitarian aid helps keep prices for food and non-food items lower, as business owners need to set their prices based on this as well.

When the news broke that the UN security council resolution might not be extended, and aid completely cut, prices skyrocketed. Most people are barely managing to survive, and if humanitarian aid gets cut they will have no other choice but to either die or move again and, as borders stay shut, the only option would be to move to regime held areas- where they risk torture, death or having to fight. Assad’s regime knows this, and we are afraid they are going to use food as a weapon: “starvation or submissiveness”, as the informal motto in many parts of Syria goes.

Are food and medicine really a privilege that world leaders have to vote on? Is keeping people alive a matter that needs being negotiated over?

We are incredibly anxious and worried that the resolution might not be renewed and look in horror at the scale of devastation millions of people would have to go through.

Syrians have suffered more than enough.

We are hoping that, at least for once, politicians and world leaders will put people before their political agenda, and that the Bab Al-Hawa border will stay open and continue providing life-saving humanitarian aid into North West Syria.

Press release
< back to news